Between Two Servers #18: Women in Tech on International Women's Day 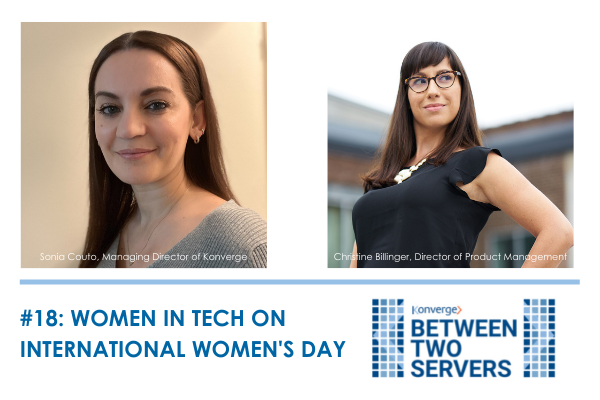 Light Transcript of the Podcast

C:Welcome to our international Women's Day Live. I'm going to be chatting here with Sonia Couto. She has had a lot of experience, over a decade in the tech industry. I've had over ten years of experience in the tech industry. So I thought that we could get together and chat a little bit about women in tech, especially on this day, International Women's Day. It's a good day to have this conversation.

S: I mean, I have lots of questions for you too. So I think we're going to have like going back and forth because you have been through a journey in tech, so it's going to be like really interesting.

C: even in Canada, you know, women are still highly underrepresented in tech. And I think like looking at the stats, it's about 25% of the tech industry is made up of women. And I mean, that goes through that includes like women who are developers also like in management and executive positions. So I'm curious from your take as a woman in tech in Canada, do you think it's improving?

S: I mean, compared to like 15 years ago when I started in tech, yes, I would say yes. It is improving. But I mean, obviously everyone has their own views. So I'm going to give my view on what I think. I think a lot of it has changed not because of global change, but because a lot of women have said, you know, enough is enough if we're not going to have these positions available to us, we're going to go and start our own companies.

So in the last like 15 years since I've started in tech, I have seen a huge change in that we're a lot more women are starting their own companies, and not just in tech. And just just in general, a lot of women are just saying, you know what, I'm going to do it. I'm going to take the risk.

C: I remember like probably about 15 years ago is when I did a web design and development course and being in that classroom, there was it's 80% were men and 20% were women. Right. And I can only imagine what it would be like to walk into a classroom like that where it was reversed, like where there were or at least like 50 50.

But then I talk to these women and they're like, you know, our company is putting these policies in place and they're doing it, but they're not hiring us. And we're sitting in the boardrooms, but we're still being treated as if we're just sitting there. We're not they're not really taking our ideas into account. And so there's still a lot of work to be done. And to to really have women be heard and taken seriously.

Don’t forget, you can find us wherever you listen to your favorite podcasts and you can find exclusive updates and clips across our social media platforms: